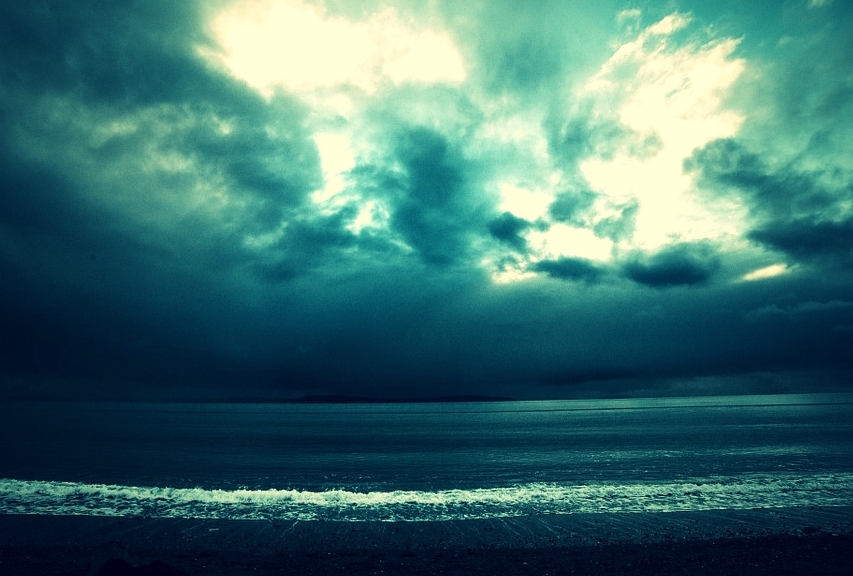 The walk through the coastal forest had taken longer than any of them expected, but there it was, just as Jason had said it would be. The ancient mansion stood in an overgrown clearing surrounded by the dense, dark woods. It was three stories tall with crooked shutters, chipped white paint, collapsed awnings, and a garret in one corner that opened onto a rooftop patio. Even before they stepped into the clearing they could hear the sound of the ocean somewhere beyond.

Georgia had spent the long walk wondering just why she agreed to go along with the others, two couples she had grown to despise, but she knew very well, deep down, that Jason was the reason. They had met in Sunday school and secretly dated for three months before they had “the conversation,” as she still called it. They agreed they both loved one another but there wasn’t a future together. Neither of their parents would agree to the relationship and it would just be hell on them both. He gave reason after reason and she agreed with each, quietly, with hidden reluctance, and so they agreed to make a friendship out of it. It was something, Georgia thought, and certainly better than nothing.

A week later, Jason began dating Hanna and had continued to do so going on six months. It broke Georgia’s heart, but she held hope that Jason would see the light and come back to her, so she chose to remain close, a friend, no matter the pain. Now she watched as Jason and Hanna ran through the clearing together toward the old house, just where Jason said they’d all find it. Georgia slowly followed, carefully placing her steps between stones and bramble bushes.

Kerry also moved cautiously toward the house, while her boyfriend, Jason’s brother Wayne, raced ahead, determined to “kick the door down” and get inside first. Kerry called out that they should all stay out of the place, as she had said the entire walk there from the church’s summer camp. They had all grown tired of Kerry lamenting the many ways one could die in an old home.

“The floor could give right out. It happens all the time,” Kerry said when they were halfway through the woods. “You take one wrong step and the next thing you know you’re in the basement, impaled on some floorboard or something. Or there could be hornets inside. Or syringes with diseases. Or—”

“Hey Wayne,” Jason had shouted over his shoulder, “tell your grandma she should have stayed home if she’s so scared.”

Jason, Hanna, and Wayne laughed at that, their voices bouncing through the trees like a chorus. Kerry simply turned red, and so did Georgia out of sympathy. They briefly caught each other’s eyes and they knew the trip had been a mistake, but they kept walking anyway.

As Wayne neared the house, running at half speed to time his launch against the door, Jason jumped into his path and shouldered him out of the way, releasing his distinct horse-like guffaw, which Georgia had always found cringe-worthy. Wayne climbed up from the weeds, wiped off dirt and leaves, and laughed while helping his brother shove the heavy, sagging door aside to let them through one at a time. Kerry was last, calling out one final weak “You guys…” before breaking down and joining them.

They had hoped to find a treasure trove of antiques to sift through, but the rooms were all empty. Even the lighting fixtures were gone. Wallpaper rotted away in strips and drooping waves, and the house smelled of mold and the salty sea air billowing in through broken windows. The floor groaned beneath them with such a sharp whine at every step that Georgia wondered if Kerry was right about the rotting wood giving in. She kept close to the walls and avoided clustering near the others. Kerry barely moved from the doorway. The others raced through the rooms, opening cupboards and closet doors searching for anything worth stealing, hooting and hollering all the while.

Georgia once again caught herself staring at Hanna as they all ascended the staircase. She wondered if the girl knew of Jason’s previous romances. Likely not, unless she either didn’t care or was a phenomenal actress. Georgia decided she must simply be stupid to not pick up on Georgia’s yearning and staring, on the awkwardness that burned the hours whenever they were all together. Or maybe, Georgia thought, it’s only me who feels it. Maybe I’m the fool.

The upper floors were all the same: decrepit and empty. It was Wayne who found the door to the roof, and they all spilled out onto the flat surface, standing in quiet awe for a moment as the view through the trees stole the words from each of them. The beach and the ocean beyond were clearly visible, as only a slope of brush, saplings, and overgrown saltgrass stood between them and the bank of sand.

“I love this view,” Hanna said. “I could stand here all day.”

“She’s right,” Jason said, leaning over the railing to look down. “That’s the story I heard about this place. It’s a ship captain’s old house. When a sailor is out to sea, their wives would watch from the roof for the sails in the distance, sails bringing their loved ones home again.”

“And when the sails never came back, those wives turned into widow’s,” Georgia finished.

“Hence,” Jason declared, “a rooftop like this became known as a widow’s watch.”

“You don’t know the half of it.” Jason walked over toward the forest side of the house. “Story I hear is people come from the camp and sometimes at night you can stop at the treeline, and you see a woman walking back and forth up here, right here. Just her profile, black against the moonlight.”

“Stop it,” Kerry insisted. “I don’t want to know about things like that when we’re stuck up—WAYNE!”

They all laughed as Wayne goosed Kerry from behind, then ran from her as she punched his backside, through the door and clattering down the stairwell, Wayne howling with laughter all the way down. Jason grabbed Hanna’s hand and they followed, but Georgia lingered, glancing out at the treeline, then out to the sea. She knew when Jason was lying. He’d never heard such a story, and even if he did she could tell he didn’t believe it and only told them so because he wanted to give Kerry, and maybe Hanna, a good scare. Georgia had heard too many of Jason’s stories to believe anything like that. But the house did feel heavy to her, not in a haunted way, but in a lonely way. She stood at the edge of the low railing surrounding the roof and stared at the ocean, the waves, the whitecaps further out, and wondered what it was like to live there when the house full of life rather than sad stories and sagging floorboards.

Georgia heard Kerry and Wayne shouting at each other from within the house somewhere below, and she saw Jason and Hanna walking hand in hand down toward the beach, weaving through the sparse trees and sand dunes. She sighed, knowing she’d have to join them all again soon, and took in the spectacular view once more before she—

Something in the distance caught her eye. A black dot on the horizon. Small and steady. She squinted and strained to make out what it was. A boat? One of those windmills out on the channel islands?

The more she strained to see, the harder it was to look away. Curiosity seemed to grip at her chest, tighter and tighter. She heard laughter and calling again, someone’s name. Kerry’s? Her own? It was too distant to make out. It sounded a little like Jason on the beach. Yes. That’s all it was. And all the while the black dot grew. Not a boat, no. It was too big for that now. Her eyes fluttered. Her ears picked up on more calling, voices hollow, tinny, like someone speaking into a can in another room. The wind had died and Georgia sensed peripheral movement below her, something racing back and forth through the brush and weeds, through the forest and clearing, silent movement, but too fast. Frighteningly fast.

The black dot grew ever larger, and for the first time Georgia became truly aware of her inability to move or look away. The darkness now enveloped the horizon and the water and encroached upon the sand. She heard her name, distinct now, a pleading, a begging, voices tainted with fear. The black dot grew ever larger, and Georgia felt an overpowering horror that it was already too late. But too late for what?

She closed her eyes and was unable to open them again. The railing was cold in her grip. Her knees shook. Her body trembled. She heard Jason calling for her, closer suddenly. Oh how she missed him, loved him. Why couldn’t he see that? Why wouldn’t he return to her? She heard his voice coming closer, echoes and laughter, breaking and snapping, screaming and crashing. She smelled something sweet on the ocean breeze caressing her face once more. She opened her eyes.

James H Duncan is the author of a dozen books of poetry and short fiction, including What Lies In Wait, The Cards We Keep, Dead City Jazz, and his most recent book, We Are All Terminal But This Exit Is Mine. He is the editor of Hobo Camp Review and spends his time writing novels, traveling by train, and visiting independent bookstores to review them in his blog, The Bookshop Hunter. For more, visit http://www.jameshduncan.com.