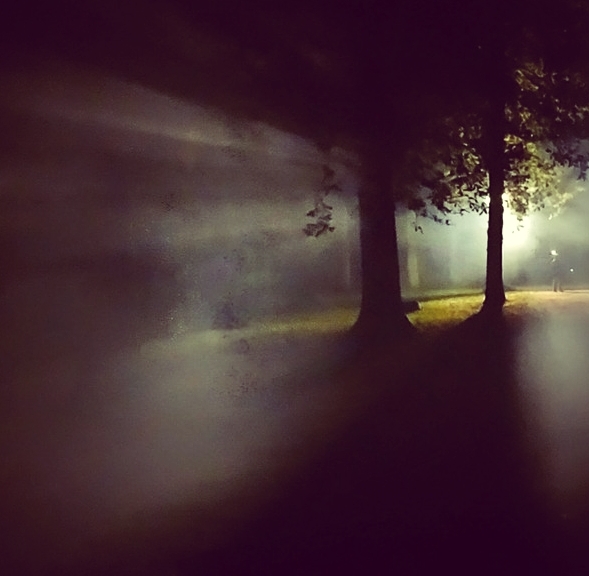 Many people do not believe
Slender Man is real and we wanted
to prove the skeptics wrong. We
took her in the forest and said
that we were going to play hide
and seek. I tackled her. I stabbed her.
Everywhere. 19 times. We told her
to lie down, so she wouldn’t lose blood
so quickly. We told her to be quiet
and we left, but she was able to crawl out of

the forest and flag down a bicyclist who came to
her aid, saintly bicyclists in otherwise hellish places,
places where the pigs are bigger than pickup trucks
and poets jump off bridges when boredom
gets too heavy. We’re just a bunch of girls
from Milwaukee trying to impress Slender Man.

We wanted him to take us away
and nobody even liked that girl. At the time
it wasn’t a big deal, bringing her into the woods
and attacking her, hoping she would die
in American snow. It’s what he told us to do,
but now that I’m older, I realize that Slender
Man is everywhere and he wasn’t talking to
just us, but everyone – you’re just not listening.

He lives everywhere, in places where rusty mini-fridges
get possessed by the ghosts of dead drunks and
my granddaddy is one of them and they go stomping
through abandoned main streets looking for vulnerable
six-packs to swallow, places where all the policemen
look like tall monsters with long arms,
almost like tentacles, strangling playgrounds
and corrupting innocence with faceless stares
and boots to the throat, places all over the Midwest

where there are these landfills of corsages
and unborn babies just past diners that are always open,
but no one’s ever there, places with sickly-looking truck stops
where cancer-ridden truck drivers are glued
to pornographic pinball machines and the wind’s
always making weird noises and when you start
slow dancing with someone, you’ll be slow dancing
with them until the day you die like all the women
in my family. Hand to breast, a 21-gun salute,
TV sets rotting from the inside out, monsters crawling
out of the neon of all-night bowling alleys where janitors
are always mopping up broken fibulas of high school quarterbacks
trapped in newspaper ink. Sure there are monsters here,

where I’m from. Why wouldn’t there be?
There are monsters everywhere these days,
gossiping on Reddit threads where the lonely
look for advice then they go to opioid dens
where they eat creepy pasta and have staring
contests with yellow kings in bean bag chairs
and the yellow kings have beer coasters for eyes
and ringworm stains ‘round their knuckles
and they hoot and holler at white noise
and throw contraceptive boomerangs at suicidal
family photos on walls and hope the boomerangs
don’t come back with a fistful of genetics, so of course

we armed ourselves with knives
and sure we meant murder in the isolation
of Midwest forests and sure we heard the crunch
of the dead that came before us and sure we slow danced
with sociopaths and sure we might’ve been a little messed
up in the head and sure we’ll probably be spending the rest
of our lives slow dancing at padded proms in asylums
crowning our brain monsters as kings of the last picture show,

but c’mon, these tentacles already had us wrapped up
in the womb where comforting words never got very far
and now there are knives crawling in the snow toward us all,
a facelessness in the American sky mummifying our eyes
when we try to look at the stars and sometimes we still wish
we were sailors and the world was open for exploration
and there are teenagers like me slithering in grout
in front of urban bodegas and there are teenagers like me
slithering in grout behind confederate barns and
we’re all slithering toward a giant knife stabbed in the heart
of America like a sword in the stone or a white house
in suit and tie and the only king who’ll pull it out is

a strung-out monster formed like Frankenstein
from your mommy’s dull hammer and your daddy’s
blood-stained corsage & their venomous saliva
that swarmed together like a rash that never had
the chance to turn into song, into music, that could’ve
been like ibuprofen for the constant headache of a
psychotic country in love with what could’ve been.
All those yesterdays, the past…I always thought the past
was the scariest haunted house, full of anemic grandfather
clocks gasping for air as shadows come crawling in to
remove our lips from ever kissing again, so I close my eyes

and imagine the best version of youth possible:
a flash mob of one-winged angels making love
for the first time in a hayloft somewhere on a
run-down old farm, impressionable teenage brains
dreaming about a change of scenery, dreaming
about a body of water that hits the gym twice a day
to harden up ‘cause it’s gonna have to carry Titanics
of the bullied to the Promised Land, a place where
crucifixes are overshadowed by antidepressant
skyscrapers blotting out all that death from above.

Look, we’ve been had, lied to: the idea of America,
the idea of Slender Man, is just a song to distract you
from your parents, a messy bed where you always lose
your cigarettes, islands of construction paper volcanoes
with lava that tastes like hair dye and streets lined with
statues of teenagers bruised by alphabets and closed door
pornographies, a history of forearm rashes, a gun to the head
and the few teenagers left alive are hosting bonfire parties
burning stacks of their parents’ love letters ‘cause that
love is outdated, ‘cause we don’t know how to love anymore
and a lot of times when I close my eyes, me and Slender Man
are holding hands and we’re sneaking into rich backyards
where old people are hibernating in hot tubs overflowing
with rat poison and headstone cabernet that looks too much
like blood and we slit their throats and you can’t tell what’s
blood and what’s wine anymore and we like it that way
and Slender Man holds me in his long arms

and everything finally makes sense
and in the distance you can hear the cries of teenagers
like me breaking away from the chalk outlines they were
born with and putting on halos made from windshield glass
from every car crash ever and then we chase our abusers
until justice is served, when Slender Man slams down his
gavel on this place we call America
and we’re all finally free from the forest.

Justin Karcher is a poet and playwright born and raised in Buffalo, New York. He is the author of Tailgating at the Gates of Hell (Ghost City Press, 2015), the chapbook When Severed Ears Sing You Songs (CWP Collective Press, 2017), the micro-chapbook Just Because You’ve Been Hospitalized for Depression Doesn’t Mean You’re Kanye West (Ghost City Press, 2017), and Those Who Favor Fire, Those Who Pray to Fire (EMP, 2018) with Ben Brindise. Bernie Sanders Broke My Heart and I Turned into an Iceberg is forthcoming from Ghost City Press. He is also the editor of Ghost City Review and co-editor of the anthology My Next Heart: New Buffalo Poetry (BlazeVOX [books], 2017). He tweets @Justin_Karcher